In this lesson we will show you how to take your arduino programs to the next level by learning to program software interrupts. The challenge with the Arduino platform is that you can only have one program or “thread” running at a time. Hence, something simple like blinking two LED’s at the same time at different rates can not be done because only one line of code is executed at a time. Much more powerful projects can be achieved if we learn how to get around this by programming interrupts. An interrupt can be thought of like an alarm clock. You set the alarm clock, and then when the alarm goes off, no matter where your program is in the execution code, it stops what it is doing, and then runs and executes the interrupt code. In order to use software interrupts, you must load a new library. The TimerOne interrupt library can be downloaded here:

Click on the TimerOne-r11.zip link, and it will download a zip folder to your computer. Find your Arduino Library folder (Video above explains how if you do not know how). In your Arduino Library folder create a new folder called TimerOne. Take the CONTENTS of the zip folder you just downloaded and put it in your TimerOne library folder. Remember that when you install a new library, you have to close and reopen the Arduino IDE for it to find the new library.

Now you will want to build a simple circuit to allow control of a yellow and red LED. The current limiting resistors in the circuit should be between 200 and 500 ohms. So, lets build the following circuit: 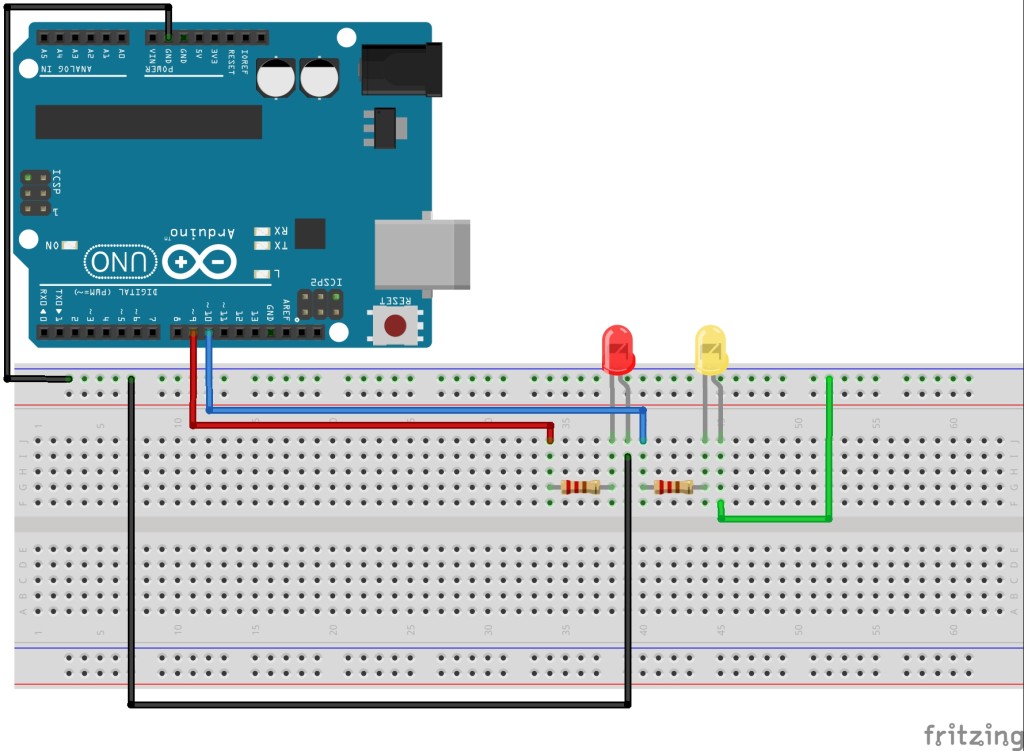 Make sure to connect the long legs of the LED to the control pins.

Now we are ready to create our first interrupts.  First matter of business is your program should load the interrupt library:

This should be at the top of your code, and will load the library.

If you place this code in the void setup, it will do two things. The first is it will initialize an interrupt that will go off every .1 seconds. Understand the units for the Timer1.initialize command are in microseconds, so 100,000 microseconds would create an interrupt every .1 seconds. Now you have to tell arduino what to do when the interrupt goes off. This is done with the Timer1.attachInerrupt command. In the code above, you can see that the command is telling the arduino that every time the interrupt goes off, it should pause what it is doing, go and run the BlinkYellow function, and then afterwords return to whatever it was doing.

So, lets pull all this together to crate a program that will blink a Red LED slowly, 1 second on, followed by one second off, and then at the same time blink a yellow LED quickly using the Timer1 interrupt. The following code would do just that.

Disclosure of Material Connection: www.toptechboy.com is a participant in the Amazon Services LLC Associates Program, an affiliate advertising program designed to provide a means for sites to earn advertising fees by advertising and linking to amazon.com. Many of the textual links in this page are “affiliate links.”